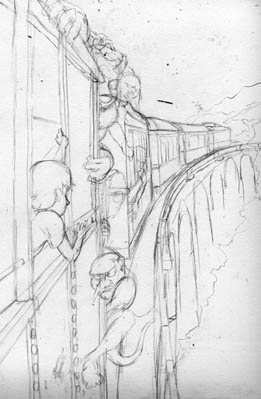 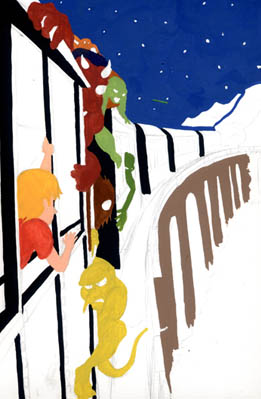 I was finally able to finish this one up last week. Overall, I don't hate it. Is it the best in the series? Naw. Is it the worst, Naw. It's decent, and decent is good enough for me at the moment.

It was sort of an uneventful weekend for me. The wife and I didn't really do much. I've had to take a bit of a break from writing the book in order to get some other stuff done, but hopefully I'll be able to get back to it sometime this week. I'm at a point (somewhere in the middle of the story) that has me a bit stumped. I know how the story is going to end, but I've written myself into a bit of a corner and I'm having trouble getting over a hump. I had hoped that taking some time away from it would help me sort things out in my head, but it really hasn't worked.

Not exactly the most well thought out plan, I know.

I saw a really good movie called "Son of Rambow" over the weekend. A really sweet little story, well directed, funny, had everything really. It didn't change my life or anything, but without a doubt it was a good flick.

So I was at the movie theater about a month ago and I saw on the marquis the sign for the coming attraction, "SON OF RAMBOW" and so I go up to the pimply-faced 16 year old working the concession stands and I say, "Excuse me... but seriously? Rambo has been around for like a million years and you guys can't spell it right?! Seriously?"

And he looked at me and rolled his eyes and didn't even respond... and so all this time I thought HE was the one who was a total idiot...

You can't see me, but I am rolling my eyes in the exact same fashion as that kid.