I promised you a snippet from book 2 before the end of the week and that's exactly what I'm giving you.

Liars and Thieves is only a couple months away!

Which is Just in time for Christmas - go figure.

Oh, don't worry about spoilers. The chapter I'm offering up is a flashback, so no major plot details are leaked. I'll save that for a little later. 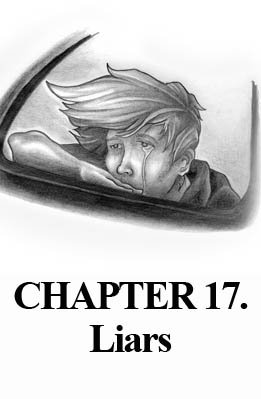 Every breath was like a knife stabbing the twelve year old Tommy Jarvis in the chest. Even the most simple of movements sent a torrent of unrelenting pain flashing throughout the entirety of his body. Outside the cold window pressed against his shoulder, the darkened world passed by in flashes. Streetlights soared like shooting stars, dragging behind them ghostly trails that wagged across the blackness like the latent images of never-there monster tails. In desperate need of a tune-up, the car underneath him clanked and creaked, its engine struggling to maintain even the most average of speeds for any significant amount of time. Across from Tommy, only half awake and hunched over the steering wheel, was his father. The eyes of Chris Jarvis were wide, the stubble on his face at least two days old. Since the funeral for his wife earlier in the week, Chris had spent his days fading in and out of reality. This was due in no small part to the endless stream of mind altering, wonderfully numbing liquid consistently making its way down his gullet and back up again into his brain. Problems were easier dealt with when one had the help of friends – Chris had found his friends in bottles. Faced with a red light, Chris slammed on the breaks, bringing the car to a screeching halt. Briefly glancing to his right, he watched with the slightest bit of worry as his eldest son clutched at his chest, a strained grimace stretched across his boyish features.

Gripping tightly on the leather of the steering wheel, he looked away, his breaths coming in more rapid succession with every passing moment, “We’ll be there in a minute…”

The hospital was still six blocks away but it was not the time or even the amount of pain his son was in that worried Chris at the moment. There were much larger things at stake; things involving his personal well being and things involving the truth. The sweat pouring down his forehead seeped into the crack of his lips – salty and warm, he awkwardly swallowed it down. From two feet away, Tommy groaned deeply, the boy’s breaths seemed labored and anguished, as a barely there wheeze escaped his lips. Chris asked himself, ‘How did this happen?’ Sifting through the blurry memories scattered across his mind like debris from an explosion, he found little answers. How could he do this? How could he do this to his own son? Worse yet, what if someone found out?

Before he even realized what he was saying, the words were leaving his mouth, “It was an accident Tommy…you got in a fight at school…you didn’t tell me until just now…it was an accident.”

Tommy could only barely hear his father. Stretching his neck upward, he twisted his nose toward the fresh, moist air pouring through half-opened window next to him. The dewy smell of early morning entered his nose and traveled down his chest, caressing his injured ribs from the inside. The momentarily relief carried with it an all too brief moment of clarity, making it possible to once again put to use his other senses.

Again came his father’s voice, clearer this time, more insistent now with the hospital only a few blocks away, “Do you hear me Tommy? It was an accident, right? Look at me and tell me it was an accident…”

Reluctantly Tommy turned his head to his father, the pain in his chest moving outward once again and pouring over him like molten lava and scorching his insides. The person sitting across from him bore little resemblance to the man he’d known for the entirety of his young life. His father had changed. Whether by situations beyond his control or on account of a weak will, the father Tommy once knew and once loved was gone. In his place there sat a drooling, wide-eyed, frightened and confused monster – an only partially existent thing that had lost control of everything in its life, including itself. Pulling into the hospital, the rusty car at last came to a stop and the engine puttered off.

Again Chris turned to his son, “I’m not going to ask you again Tommy…look at me and tell me it was an accident…tell me you got in a fight at school…”

His voice barely a strained whisper, Tommy Jarvis at last relented, “I…got into a fight…”

“Into a fight where?”

“And you didn’t tell me about it until this morning.”

“Tell…tell you about it until this morning…”

“It was an accident.”

While escaping Tommy’s cracked lips, the words stung far more than the pain in his chest.

Inside the hospital x-rays were performed, showing beyond a doubt that the boy did indeed have not one but two broken ribs. While being pumped full of wonderful pain relieving fluids, the doctor asked him how such a thing occurred. Tommy recited his father’s story verbatim. The doctor was surprised the boy lasted as long as he did without telling anyone; he said the pain must have been unbearable while glaring at Chris questioningly for a moment - choosing for whatever reason not to voice his concerns. As if reading from cue cards or recalling a well-rehearsed speech, Tommy again fed the young doctor the story – again he lied. He didn’t know why he did it really – realizing that it made no sense whatsoever – and yet, the words existed. Traveling from his brain, they exited his mouth and were given form, becoming an independent part of the universe. Like the mad scientist’s monster, they were now alive, hungry and dangerous. This was only the first time Tommy would lie for his father. There were to be others – many in fact. With every one, the boy’s resentment grew. With every false truth, the pile of rancid, slimy blackness building in his gut expanded, pressing against his interior like a great cancerous tumor. Much the same as a virus, Chris Jarvis’ disease infected his son, twisting the boy into a distorted, grotesque funhouse reflection of himself. Eventually the day arrived when the lies came easier for Tommy, when he didn’t bat an eye or offer even a second thought. It is on this day that Tommy at last determined the price for years spent wading through lies, for time spent covering up his father’s misdeeds – forgiveness.

Perhaps not so strangely, he found some semblance of peace in this decision.
Posted by Steve Novak at 9:32 AM