Lots of work and lots of family stuff has made it a wee bit difficult to get around to posting on the ol' illustration blog. Add all of that to the fact that I've been having a lot of trouble sleeping and you've got a recipe for disaster more annoying than a weekend long marathon of Ben Affleck movies.

Anyway, hopefully I'm entering a bit of a downspell and hopefully that'll mean throwing something up on here more often.

I don't like making promises, so we'll just stick with hopefully.

Anyway, my wife has been snapping some pictures of me early in the morning and we think that we've discovered the reason I'm not getting any sleep.

The stupid cats seem to think my head is their bed.

(Don't give me any guff on the black and white stripped quilt. I've had it since I was a kid, it's ugly as sin, it needs to be thrown away, I've heard it all from my wife more than once. I'll tell you the same thing I tell her...it's not going anywhere. That's right, I'm a thirty year old Linus. Deal with it.) 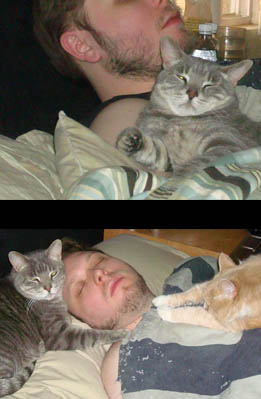 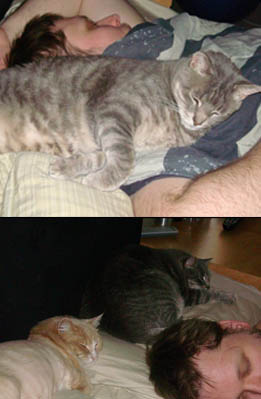 Hehe, Steve Novak has a blankie.

Does Tami leave a night light on for you, too?

Steve Novak...
something told me to check out your page.
I hope you are doing well. I let a friend read "Goats" this week and she absolutely loved it. I have another that wants to borrow it, but I'm scared it's going to get ruined. :)
I miss your ass, Novak. yes, I said ass.

btw- my cats wake me at 5 a.m. every morning and think my head is a pillow also. I have considered stuffing them as punishment.

Wow I'm glad I stalked you to this site...

I used to read you all the time on MySpace...

You sort of look like Linus when you are sleeping...

alicia said... "Does Tami leave a night light on for you, too?"

Actually no, but now that you mention it, I would likely sleep a little better if there was a little light. You know, to keep ghosts away and stuff. ;)

mik said...
Steve Novak... "something told me to check out your page. I hope you are doing well. I let a friend read "Goats" this week and she absolutely loved it. I have another that wants to borrow it, but I'm scared it's going to get ruined. :)"

Hey Mik! Nice to hear from you again. This is actually a completely different site than my other blogger one. I closed that one quite a while ago and opened up this one as more of a promotional tool for work than anything.

Good to hear someone is still enjoying that book. I actually removed it from publication some time ago because it was causing me more problems than it was worth when it came to my career.

So I guess it's a collectors item? ;)

Good to hear from you kiddo.

the patron saint of sarcasm said... "Wow I'm glad I stalked you to this site...I used to read you all the time on MySpace..."

I amazed that people still remember me from back in those days. This blog has ZERO in common with the old myspace one though. It's a WHOLE lot more tame. ;)

In fact, I really only started it to act as a bit of a promotional tool for my illustration work.

You're going to get bored with it really quickly. ;)

I don't care what you say. I'm not getting bored. Who could get bored with hideous pictures like those?

These pics are hilarious. Who knew a human being could serve as a comfy bed?

I understand about the blanket. I often think about a blanket I used to have on my bed, I think my mom threw it out when I went to college. I still think about it.

For this grave indiscretion your mom must be punished. ;)